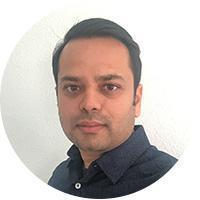 Chinmay began his career in Information Technology working as an integrationist for Smiths group; after gaining valuable experience, he transitioned into surveillance.  The work was fascinating but he quickly realized that his work lacked professional fulfilment. Over the last 10 years, Chinmay has worked in many different capacities. He started in the Emergency department, later transitioning into Gastrontrology and HemeOnc after completing a Bachelors of Science in Bio Engineering from the University of Illinois at Chicago. He became involved in regulatory affairs, in the pharmaceutical sector; it is here that he participated in many clinical trials. He later completed his Bachelors of Science in Nursing and became a Registered Nurse (RN).

After relocating to Las Vegas, Chinmay gained more experience in small hospital management as an Assistant Director of Nursing. This allowed him to integrate his passions at Wahab Consulting / Research and Wound Care Experts as the Director of Research and Business Operations.

His outside interests include playing tennis, biking, and hiking mountain trail of which there is no shortage in southern Nevada.